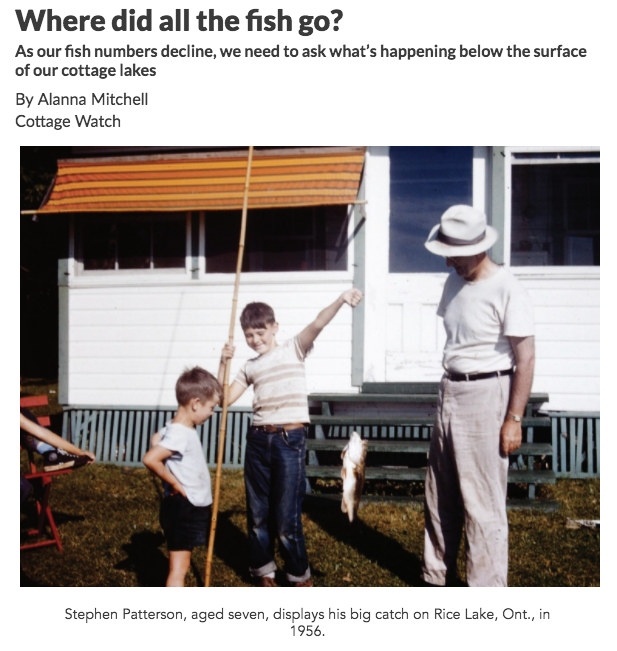 “But it’s not just numbers of fish that are changing. In Canada, the number of anglers is waning. More than one in five Canadians was fishing for sport in 1975, according to the federal survey. By 2010, the number was less than one in 10…That’s despite the fact that the country’s population had grown by nearly half over those same three and a half decades.”

Stephen Patterson can remember every delicious detail of the summer day at the cottage in 1956 when he turned seven.

It was pitch black when he got up, that witching hour between night and dawn. He crept to the well near the family cottage on the north shore of Rice Lake, south of Peterborough, Ont., plunged his hand into its cold depths, and pulled out the wriggling mass of worms he’d stashed on the ledge there in a lidded paper container the night before.

Then he and his father picked up towering bamboo poles kitted out with hooks and line, loaded them into a little putt-putt boat with a one-and-a-half horsepower motor, and headed up the Otonabee River for a day of fishing. Best of all, his mother, sister, and three brothers weren’t along. He lay back in the boat, guarding the poles, gazing at his dad. Just the two of them, for the first time ever. He could hardly bear the anticipation.

The world was different in 1956. That was the summer Elvis Presley twitched his hips on live television for the first time. It was the heyday of Roy Rogers and Lawrence Welk. Skirts nipped the waist, and bosoms came to a sharp point. Men felt no shame wearing shorts with belts and high plaid socks. Canada was not yet 90.

Fishing was different then too. It was a more carefree time. You could catch any fish and feel good about eating it. Silent Spring, Rachel Carson’s revelatory exposé of the effects of pesticides, wouldn’t be published for another six years. Mercury’s devastating neurological effects—now known as Minamata disease—were just being identified in fish in Japan. Climate change stood squarely outside the public radar. The idea that governments would have to stock fish to keep lines in the water was unthinkable. Catch fish only to let them go? Absurd.

In 1975, when the federal government began conducting its recurring survey of recreational angling, Canadians caught and kept nearly 160 million fish, an average of about 45 for everyone who cast a line. By 2010 (the last year for which we have numbers; new ones are expected later this fall), they caught 153 million but put two-thirds of them back in the water to protect dwindling fish populations. On average, there were 21 kept fish for every resident angler that year.

The wake-up call about the state of Canada’s fish stocks came in 2002 with the publication of a shocking and controversial study led by the University of Calgary ecologist John Post, published in Fisheries, the magazine of the American Fisheries Society: “Canada’s Recreational Fisheries: The Invisible Collapse?” Looking at anglers’ favourite species in Canada’s vast river drainage basins, Post and his co-authors found a sorry picture. Overfishing and damage to habitat were widespread in southern B.C., Alberta, and southeastern Ontario.

Some examples from Post’s study illustrated the whole. If you were to spend an hour fishing in Puntzi Lake in central B.C. in the 1960s, you could expect to catch five or six trout. By the 1980s, trout was so overfished there it would take you four hours to catch a single one. Walleye were dramatically on the wane in 21 of the 27 Alberta populations that Post analyzed. Alberta’s pike were also in trouble; at Kehiwin Lake in 1969, it took a leisurely two-and-a-half hours to catch a pike. By 1995, it took 25 hours. And the fish were younger and smaller.

Today, the biggest problem is that the prime living spaces for fish have disappeared or changed, says Nick Lapointe, a senior conservation biologist at the Canadian Wildlife Federation in Ottawa. But they also face invasive species and diseases, which are spread from one waterbody to another through the movement of fish, water, equipment, and boats.

One such threat is whirling disease, which struck Canada for the first time last August. Long a scourge in the U.S., it showed up in Johnson Lake in Banff National Park, and by this summer, the parasite that causes it had spread to the watersheds of Alberta’s Bow, Oldman, and Little Red Deer Rivers, according to the Canadian Food Inspection Agency. While the disease doesn’t harm humans or other mammals, it’s catastrophic for trout, whitefish, and salmon. If infected young, they develop skeletal deformities and a black tail and then whirl in the water uncontrollably. The death rate is about 90 per cent and scientists have been unsuccessful in halting its spread. “It’s a big story in Alberta. One of the best trout fisheries is in the Bow Lake and Bow River system,” says Lapointe.

As for Ontario’s heavily peopled southeast, 60 per cent of lakes that had once supported scads of lake trout were so emptied out that they needed to be stocked in the 1990s, the Post study found. It’s a similar picture for brook trout in much of Ontario, Lapointe says. “And half of the native lake trout populations in Ontario have been lost completely,” he adds.

Pike and walleye are depleted in Southern Ontario as well, and the big ones are gone, Lapointe says. Since the ’70s, they’ve dropped in size by a tenth, says Cindy Chu, an inland lakes research scientist with the Ontario Ministry of Natural Resources and Forestry who helps conduct intensive freshwater studies each year. It’s overfishing, but it’s also climate change. Pike and walleye need water that’s less than 25ºC and much of that cold water has vanished.

What’s more, the relationship between changing water temperatures and fish survival is so clear that warm-water-loving fish, like small- and largemouth bass, cottager favourites, are thriving, even as other species fail. According to Chu, bass have been expanding northward in Ontario by 13 to 17 km a decade since the 1970s, in lockstep with the northerly march of warmer waters. In fact, research on a population in Algonquin Provincial Park shows that the water is so warm that bass, which build nests in the spring, have been doing so two days earlier every decade since 1962. That warming trend is showing up in waters across Canada, and around the globe, says Lapointe.

But it’s not just numbers of fish that are changing. In Canada, the number of anglers is waning. More than one in five Canadians was fishing for sport in 1975, according to the federal survey. By 2010, the number was less than one in 10. Adult anglers fishing in their home province went from 3.5 million in 1975 to 4 million in 1985 and then plummeted to 2.7 million in 2010. That’s despite the fact that the country’s population had grown by nearly half over those same three and a half decades.

It’s a trend that has taken hold throughout North America and in lots of other parts of the world, says Brian Chan, a retired B.C. provincial fisheries biologist who now works as a flyfishing guide in Kamloops, B.C. He puts it down to the pulse of people moving to the city and to generally busier lives. “There are fewer opportunities to connect with outside life,” he says.

Perhaps most telling is what happened to all the fishing kids. In 1990, about 1.75 million kids (under 16 or those under the age requiring a licence) were reported as active anglers. Just 20 years later, only 48,565 youths were counted, despite the fact that this number now included all those under 20. This meshes with the recent Public Health Agency of Canada conclusion that today’s youth spend far too much time in front of screens and far too little time exercising. It adds up to most of a whole fishing generation gone missing.

Stephen Patterson had caught the odd sunfish before the day he turned seven. But that day, he and his dad, William, were on the hunt for something grander. William was a busy United Church minister in Fenelon Falls, just over an hour north from the cottage. The family didn’t see him much. And since Stephen’s birthday fell in July, while the family was at the cottage, his parents worried that his celebrations were a bit tepid compared to those of the other kids. William hatched a plan to remedy two problems with a single solution: a solo trip with his son on the special day itself.

Stephen’s mother, Cora, had packed tomato sandwiches the night before. William steered the boat to the perfect spot, and they settled in for the day. By a miracle, a big bass took the bait. It was an epic battle. But finally, Stephen and William got the fish into a net and out of the water. They chained it through the gill and towed it home behind the boat in time for dinner.

And, oh, the uproar. There was Stephen on his seventh birthday with this trophy. There were oohs and aahs, and the camera came out to record the moment. “It was just magic,” he says.